We champion the millions of women who selflessly offer their time and talents to our Country and its people.
One does not have to be famous to make a difference and our members make a difference in the day-to-day lives of people in their communities, in the North and across our nation. We have women who work tirelessly in shelters and food banks; offer their talents pro bono in their fields of expertise, be it legal advice, musical talents, sewing and knitting, preparing meals or caring for a friend or neighbours children when asked. These women are the true heroes of Canada, asking for nothing but giving what they can and the Members of IODE sit very high on the standard of the unsung and quiet Women of Canadian History.

Members from the IODE Maple Leaf Chapter in Goderich Sock it to Cancer. 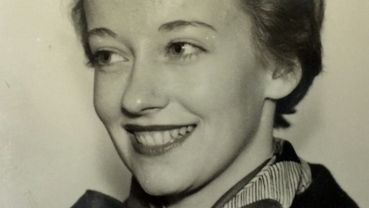 Helen Brimmell, who went by Helen Bannerman at the time, was a Canadian Press reporter and member of the Canadian Parliamentary Press Gallery when this photo was taken in 1947.
On 01 June 2016, MP Geoff Regan Speaker of the House of Commons honoured 96 years old Helen Brimmell.  Her biography was read aloud and all members stood and applauded her accomplishments.  She then attended a tea in the Speaker’s private quarters.

"One of the earliest female members of the Canadian Parliamentary Press Gallery was honoured Wednesday in the House of Commons for her years of work in the bureau.  Helen Brimmell graduated from the University of Toronto in 1943 and worked for the Canadian Press under her maiden name of Helen Bannerman in Toronto for a few years before being assigned to Parliament Hill in 1946.

She was the third woman to officially join the gallery, which at that time only allowed men to attend its annual dinner. That fact was a bit of a sticking point when it came down to voting her in, Brimmell remembers.  'The chairman of the press gallery executive came to me and he said, 'Helen, we'd like to vote you in, but you have to promise not to try to come to the annual dinner - which was, of course, a stag party,' the 96-year-old told CBC Radio's Ottawa Morning.

From 1948, a glimpse inside the parliamentary press gallery offices - and at some of the fancy hats of a bygone era. (Library and Archives Canada)
'And I said, 'That's all right with me. If you want to have a stag party, I'm not going to crash it.' So they voted me in.'

Brimmell remembers the day she got her membership pass and the excitement she felt at being able to have lunch in the Parliamentary restaurant as a full member - and not someone's guest - for the first time.  'The manager came out of her office, very graciously, to shoo me down to the cafeteria. ... and I just put my membership ... card on the table, I didn't say anything, and she read it. She didn't obviously believe it, but she apologized and went back to her office,' she said with a laugh.

It wasn't the first time Brimmell's youthful appearance caused some trouble.  'I don't think I've ever looked my age because at that time I had to carry around my birth certificate to be served alcohol, and that went on for quite a while.  And the secretaries [of politicians] always thought that I was just a gopher. They didn't realize what I was up to,' she said."

Helen Brimmell is a long standing member of the IODE Victoria Guelph Chapter in Guelph.

IODE Canada is a national women's charitable organization dedicated to enhancing the quality of life for individuals through education support, community service and citizenship programs.